How young do you need to be to learn a foreign language? 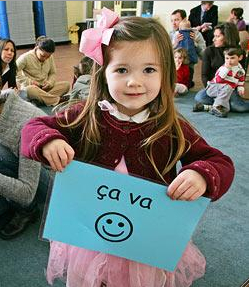 According to a Eurobarmeter report, 98% of European parents believe learning at least one foreign language is important for their children’s future. It is commonly believed that young children are able to soak up a language more easily than teenagers and adults. Technical terms such as the critical age and neuroplasticity are mentioned by those who believe our linguistic ability declines every day and crashes at puberty. It may be true that young children are able to adopt a native or near-native accent in a language they learn as infants and that their lack of self-conscious inhibition allows them to immerse themselves in activities in a way that teenagers and adults cannot.  They can throw themselves into games such as singing and acting in the new languages and enjoy popular television programmes such as Dora the Explorer, which is used to teach snippets of foreign languages to children around the world.

It is also clear that school children have more time to devote to language learning than adults with jobs, families and other responsibilities. It may be surprising, then, that foreign languages will only be compulsory in primary schools in England from 2014 when this is already the case in most developed countries. While this decision is to be welcomed, particularly at a time when foreign languages are declining in secondary schools and further/higher education, it does pose some interesting questions, not least regarding who will teach these languages. A primary school teacher who is apparently not fluent in French commented as follows in the newspaper: “I did suggest to my Head that he take videos of my lessons and sell them to French Television as comedy shows – I thought that might raise the money to pay for a proper linguist to do the teaching.”

Here in Wales, primary school children in English-medium schools already learn Welsh as a second language and many politicians are now calling for foreign languages to be made compulsory at as young as three or four years of age, with one party calling for Wales to become a “trilingual nation” and another for a “revolution” in language teaching and the establishment of a language teaching academy. The advantage of having two languages from an early age should be harnessed to learning another one, as it’s well known that the more languages a person knows, the easier it becomes to master a new one.

However, all this talk of young children learning languages should not distract us from the fact that it is also possible to learn foreign languages as an adult. Indeed, some believe it is easier for an adult to learn a new language – a grown-up can understand and absorb the grammar, vocabulary and expressions of the language more easily and is better able to recognise patterns. Adults have a much larger vocabulary in their mother tongue than the average 7 year old, a great asset for understanding other languages, especially those from the same linguistic family. Older learners may be more motivated – children might think learning is fun, but they are unlikely to have a deep understanding of the usefulness of a particular language for them; this clip from the Catherine Tate show is a humorous take on some teenagers’ attitudes to language learning. An adult often wishes to learn languages for a particular reason, be it tourism, work, migration or as a personal challenge, and has a clearer view of his/her particular interests.

This is where bespoke courses like the ones provided by Business Language Services come in. If you as a student know that you need to concentrate on speaking rather than writing, the tutor will tailor your course to reflect this. If, on the contrary, you will mainly be working on written texts, your teacher can help you reach a level of understanding very quickly by focusing on the particular texts and vocabulary that you’re likely to encounter. Being able to learn in a small group or one-to-one means no time is wasted on activities that don’t interest you and all the time is spent working towards your goals. As legions of older learners know, it’s never too late to learn a new skill and language learning in particular can slow the ageing process.  So, if you are one of the 98% of parents who want their child to learn a foreign language, why not show the youngsters how it’s done by taking on the same challenge yourself? Contact us or encourage your employer to do so – you won’t regret it and it might even make you feel younger.