The UK is cram-packed full of historically interesting sights and places of interest portraying the island’s colourful and diverse history. From Viking remains in York to battle sites spanning hundreds of years, keen historians will have no problem putting together an itinerary of exploration.

If, however, your interest in history has less to do with castles or the Industrial Revolution and more to do with the history of English language within the UK, the way in which our linguistic practices have altered over the years and what has caused many of these variations, then there are still plenty of places of interest to visit.

Together with his wife, Hilary, renowned linguist David Crystal has put together a guidebook called Wordsmiths and Warriors which details a number of tourist attractions and must-see locations, all of which have had a historical impact on the English language of today.

David Crystal has written over one hundred books on languages and this tourist guide, perfect for those intending to visit the sites themselves, or just to enjoy some armchair travel, has become an extremely popular text. Here is a small selection of the sites which David and Hilary insist should be visited in order to better understand the origins of our language. 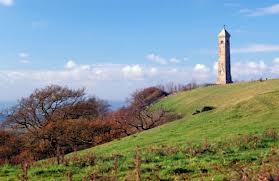 North Nibley – The First English Bible
The 1525 translation into English of the Bible, by William Tyndale, caused a great amount of controversy, with the English powers of the time condemning the translation – which had been published abroad – and ordering all copies to be burned. Interestingly, this translation contains the initial introductions to well-known English phrases such as “stumbling block” and “powers that be”. A monument to Tyndale stands in North Nibley, where you may climb over a hundred steps to reach a vantage point from which the surrounding countryside may be clearly seen and appreciated.

Norfolk – Evidence of the First Recorded English Word
Caistor St. Edmund in Norfolk was the home of a famous cremation urn discovered as part of a local archaeologist gig. The urn was engraved with the word “Raihan” which historians and linguists believe translates into the modern English for “roe deer”. Experts believe that the bone found within the urn, which was engraved with runes, came from a roe deer.

Moving on to Suffolk this time, where a small golden disc was found by a farmer. The disc was engraved with the Anglo Frisian runes: “Gaeogogae maegae medu”, which, although unconfirmed, appear to translate roughly as “This howling she-wolf is a reward to my kinsman”. If correct, this linguistic piece of history speaks as much to the culture of the time as the language.

Pegwell Bay – The Arrival of the Anglo Saxons

Pegwell Bay in Kent was the landing site for the Germanic tribes who conquered the Eastern portions of England in the 5th century. The invasion was led by two brothers, Hengist and Horsa, and a replica of their ship may still be seen at Pegwell Bay.

Lichfield – the Home of Samuel Johnson

In Lichfield, Staffordshire stands a museum which houses a great number of personal papers and items relating to Samuel Johnson. Johnson’s renowned dictionary helped shape the English language and encouraged the compilation and use of dictionaries moving forward.