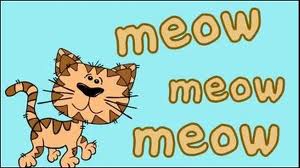 We learn from a very early age that cows go ‘moo’, sheep go ‘baa’ and ducks go ‘quack’. This sort of vocabulary is rarely taught in an educational environment, however, at least not when learning a second (or third, or fourth) language. When we start learning a new language we begin with the basics, i.e. numbers, days of the week, simple questions and answers, etc. So it can be a bit of a shock when years down the line you find out that your beloved pet sounds different in another language/country. Why is it that dogs go ‘woof’ in Britain, and indeed ‘ouaf-ouaf’ in France, but ‘guau-guau’ in Spain? (The Spanish version is remarkably similar to another English rendition, however: ‘bow-wow’. In fact, most other languages use a sound similar to this for dogs, for example ‘hau-hau’ in Polish, ‘au-au’ in Portuguese and ‘bow-bow’ in Urdu.)

The language you speak affects the way your mind divides up sounds, which is why it can be hard for us to understand a new language (just think back to the dreaded listening exams at school!), even once you’ve mastered the basic vocabulary and grammar. A classic example is the tonal quality of Chinese whereby one syllable can have up to ten different tones, fairly indistinguishable to the average English speaker, but which change the whole meaning of a word.

The words we use to represent animal noises are basically all onomatopoeic, to some extent or another. That means that the word used to represent the sound is based on the sound itself (i.e. it imitates the source of the sound). Other examples of onomatopoeia in English include ‘crash’ and ‘hiccup’. Onomatopoeia conforms to the wider linguistic system of the language, so changes from tongue to tongue.

Cats say ‘miau’ in Spanish, Hungarian and German (just like our English cat’s ‘meow’, really), but ‘nyan’ in Japanese and ‘meo-meo’ in Vietnamese.

A bee ‘buzzes’ in English, but goes ‘zoum’ in Greek and ‘vizzz’ in Turkish. Note the use of the ‘z’ noise common to all three languages, though.

Just imagine all the different possibilities for ‘Old MacDonald Had a Farm’! In fact, many languages use the same tune as we do but with slightly amended lyrics, to do just that. In Chinese, it’s Mr Wang who owns the farm, in Spanish it’s ‘Pepito’ and in Danish the farm belongs to ‘Hansen’.