Stay Emotionally Detached from Your Book- Read It in Another Language! 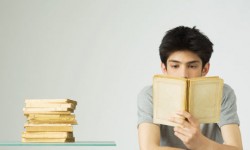 Stay Emotionally Detached from Your Book- Read It in Another Language!

Have you ever been brought to tears by the ups and downs of a really good novel? Have you ever found yourself laughing out loud at the antics of a beloved character? Whilst the primary aim of many books is to elicit an emotional response, there are times when a more detached reading of a text is needed. In such cases, the findings of a recent study into empathy when reading may be of interest. A new technique has been proposed, which has been found to distance readers from their feelings. All they need to do is read the text in another language.

Of course, for this to work, the reader would need to have a good knowledge of a second language. This is a skill that has long been known to provide a wealth of cultural, social and linguistic benefits. However, it is often suggested that our emotional connection to a non-native language is never as strong as it is to our mother tongue. This is partly due to the different ways in which we learn native and second languages. Our first language is acquired naturally and the words we learn become associated with lived experiences, such as seeing our mother smile. Second languages, on the other hand, are generally studied in much more formal, unemotional situations.

The International School for Advanced Studies in Trieste, Italy, has published a study, led by Francesco Foroni[1], which explores this theory in relation to the written word. They discovered that there is a dramatic difference between the levels of empathy a person feels when reading in a second language compared to their native language. There were 26 participants in the study, who were all native Dutch speakers and spoke fluent English, which they began learning when they were 12 years old. Each participant was asked to read excerpts of a Dutch novel and an English novel.

The participants’ reactions were recorded using electromyography to measure electrical activity in the participants’ facial muscles. This allowed the smallest changes in facial expressions to be observed. The idea behind this came from the embodiment theory, which states that, when we process an emotion, our body mirrors the physiological state associated with that feeling. This is why we tend to smile when reading about a character who is happy, and frown when a character is angry. The electromyogram registered more defined facial expressions, indicating stronger emotional responses, when participants were reading in their native language. When reading the English book, very few participants demonstrated any kind of connection to the characters or their situations.

These findings could prove useful in situations where we need to be able to distance ourselves from our emotions. For example, when making decisions about a particularly emotive subject, Foroni suggests that we could find more rational solutions by considering the problem in a non-native language. And for any linguists out there who sometimes find themselves getting too caught up in a really gripping novel, maybe they should consider switching languages next time they’re choosing a good book to read on the train.