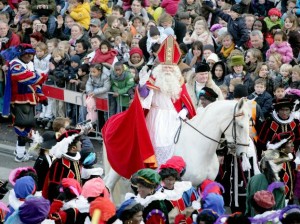 The 6th of December is Saint Nicholas day, widely celebrated in Europe as a gift giving holiday. St Nicholas was the bishop of Myra, corresponding to modern-day Turkey, and died on the 6 December 343 AD. We may not know much about him in the UK, but Saint Nicholas is believed to be the inspiration for the Santa Claus that we all know and love today. In his lifetime he is believed to have been a secret gift giver, and it’s apparently thanks to this man that we hang out our stockings on Christmas Eve today. It is said that he took pity on a poor man who couldn’t afford to pay the dowry for his three daughters to get married and decided to throw a bag of coins through the window into the man’s house.  On the third night, when it was time to throw in the third bag of coins for the third daughter, he threw it down the chimney, where it fell into one of the stockings she had hung out to dry. He is also the patron Saint of Aberdeen and, according to Irish legend, his body has been buried somewhere in County Kilkenny. He is usually dressed in his traditional red cape and mitre.

St Nicholas’ feast day is celebrated in many countries, including the Netherlands, Belgium, Germany, Austria, the Ukraine, Switzerland, Slovenia, Slovakia, Romania, Luxembourg, Liechtenstein, Hungary and Croatia. The day is also celebrated in Alsace, Lorraine and Nord-Pas-de-Calais in France, where grandparents tell children the story of St Nicholas and the evil butcher, who kidnapped three children and salted them in a barrel. St Nicholas saved the children and the butcher became Père Fouettard, who still follows St Nicholas today and threatens all the naughty children.

In many countries children polish their shoes and leave them out for St Nicholas to fill with fruit, sweets and toys. But if you’ve been naughty, you may wake to find a tree branch or a lump of coal in your shoe instead! In Romania, adults and children are given gifts in their shoes, but a tree branch with gold decorations serves as a warning for bad behaviour. St Nicholas is often accompanied by a helper, in Germany he’s called Knecht Ruprecht, in France Père Fouettard and in the Netherlands Zwarte Piet. Zwarte Piet takes all the naughty children back to Spain with him in a sack and is usually dressed in colourful clothes, a lace collar and a feathered cap and has a chimney sweep broom that he can use to smack children who misbehave. In Slovenia, shoes are filled with a mixture of coal and sweets, as it is believed most children are good and bad. In Liechtenstein, Saint Nicholas doesn’t give any presents at all, instead he goes from house to house to find out whether children have been behaving themselves throughout the year and asks them what presents they would like from the Christmas Angel, who will pay them a visit on Christmas Eve. Even when children have received presents from St Nicholas, they don’t always send him the conventional thank you letter. On the 30th of December, 44 men chase Samichlaus through the streets of Basel in Switzerland to his boat back to Spain, while children throw coal at him to try and knock his mitre from his head.

Today, the popularity of Santa Claus, the American import, is rising in European countries thanks to their exposure to American culture. However, St Nicholas remains popular across Europe and he has continued to visit children not only in a wide range of European countries, but also in the former Dutch colony of Netherlands Antilles in the Caribbean. So this Wednesday evening, wherever you may be, make sure you polish your shoes until they shine and you might wake to find some presents from St Nicholas on Thursday morning!