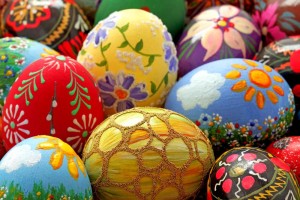 Here in Cardiff we will be celebrating the Easter holidays this weekend, but how will Easter be celebrated in other countries around the world?

In the UK celebrations include giving out chocolate eggs and going on Easter egg hunts, a tradition that originated from the belief that the Easter bunny laid eggs in the grass. In some areas of Scotland, England and Northern Ireland it is traditional to roll decorated eggs down grassy hills, a tradition that has been carried over to the US with a traditional Easter egg roll taking place every year at the White House. Latvians play a game similar to conkers with their Easter eggs – hard boiled eggs are attached to string and are hit against each other. The last remaining intact egg wins the competition.

In Spain, the week leading up to Easter Sunday, or Holy Week, is a holiday. Processions take place across the country, with perhaps the most famous one in Seville. Wooden sculptures and scenes from the Passion are paraded through the streets and the participants wear robes and hoods that cover their faces. However, in the town of Verges the celebrations take a slightly more sinister turn on Maundy Thursday. During the procession people dressed up as skeletons perform the Dance of Death, to remind people that death will get them all someday!

In the town of Oberammegau in Germany the people perform a special Passion Play once every ten years. The tradition began in 1634, when the townsfolk promised to perform the play once every decade if God spared them from the plague that was raging through Europe at the time. The next Passion Play will be performed in 2020.

In the Czech Republic and Slovakia, women are hit with whips over the Easter holidays to keep them healthy and beautiful for the year to come. The women, far from being angry, give the men decorated eggs or money to thank them. They are also sometimes doused with water, a tradition similar to Smingus-Dyngus in Poland, where boys and young men try to soak anyone and everyone with water on Easter Monday.

A tradition that has recently developed in Norway is that of reading or watching crime stories over Easter, with new novels being published in the run up to Easter and stories even being published on the side of milk cartons. In Finland celebrations have a spookier feel, with children dressing up as witches with broomsticks and giving out decorated willow twigs in exchange for eggs.

Although Western Christianity will celebrate Easter Sunday on the 31 March, for the Orthodox Church it isn’t until 5 May. So, if you are in Corfu this May you should keep an eye out for pots and pans falling from the sky – on Holy Saturday the people of Corfu throw their earthenware pots out of their windows and smash them on the street below!

However and wherever you decide to celebrate this year, we hope that you enjoy the Easter holidays!