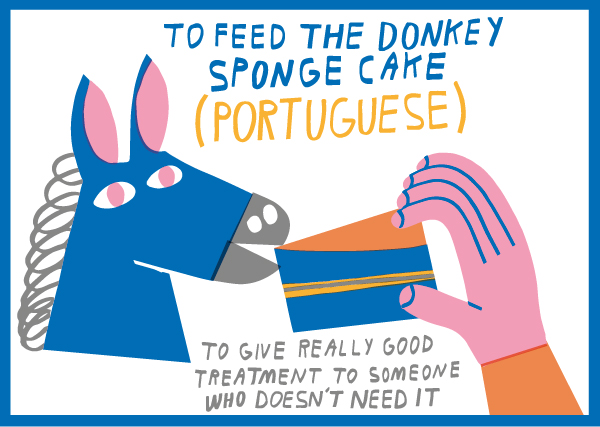 Have you ever fed the donkey sponge cake[1] and ended up giving someone pumpkins?[2] Ever drank like a chair-maker[3] and needed to relight the boiler[4] the next morning? Or let a frog out of your mouth[5] and seen someone make a fork out of a needle?[6]

How are you finding all of this? Are we breathing through the same nostril[7] or do you want to put the fiddle in the roof?[8] OK, OK… there’s no cow on the ice,[9] I’ll stop walking around hot porridge.[10]

The above is a short trip through just some of the countless, colourful foreign-language idioms. During my first forays into language learning at school, idioms (along with slang and, of course, swear words) came to symbolise the reward for the hours of classroom boredom; the chance to move away from the monotony of verb tables and the promise of picking up some real, living language.

The above is a short trip through just some of the countless, colourful foreign-language idioms. During my first forays into language learning at school, idioms (along with slang and, of course, swear words) came to symbolise the reward for the hours of classroom boredom; the chance to move away from the monotony of verb tables and the promise of picking up some real, living language.

When examining them side-by-side, it becomes clear that some languages have converged upon similar images to describe events or personal characteristics. Dutch, Estonian and Lithuanian, for example, all have strikingly like-minded approaches to hypocrisy, using phrases akin to ‘the pot is calling the kettle black’,[11] and Italian shares the imagery of ‘splitting hairs’[12] for describing an act of pedantry.

There is, however, also a fascinating amount of variety in the way different languages consider the same aspects of life. Instead of ‘tying the knot’, marriage in Tibet is known as ‘putting up a beer tent’,[13] whereas in Romania you are more likely to ‘take someone out of their watermelons’[14] than you are to ‘drive them nuts’.

While they may seem trivial, idioms are ubiquitous by their very nature and can be an invaluable way of acquiring new vocabulary, developing fluency and putting the fun back into learning. So why not get stuck in there and try to pick up a few before your next foreign excursion? Put a stone in the bag[15] and I’ll squeeze my thumbs for you![16]

[2] Spanish – dar calabazas a alguien (to reject somebody)

[3] Catalan – beure com un cadirer (to drink like a fish)

[4] French – rallumer la chaudière (to take hair of the dog)

[10] Czech – chodit kolem horké kaše (to beat around the bush)

[12] Italian – spaccare un capello in quattro (literally, to cut a hair into four)