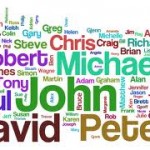 In the UK we can name our children without restriction, and furthermore we can change our given name and surname to whatever we please and however many times we like; in this respect we are one of the most liberal nations in the world. Under our common law rule, all you have to do is use your new name “consistently, openly and non-fraudulently, without interfering with other people’s rights.” In other countries, however, the laws are quite different and often surprisingly strict. Below are just a few examples.

In Tibet, children are named at birth by the local Buddhist Lama, or they can request a name from the Dalai Lama. They may also change their name as they grow up; for example, if a different name is recommended to remove some obstacle in their life.

In Germany, the law states that you must be able to tell the gender of the child by the first name, and you cannot use last names or the names of objects or products as first names. Given these humour-less rules, it might seem surprising that both ‘Legolas’ and ‘Nemo’ have been approved for baby boys. In later life, German citizens may only change their name for a recognised, important reason, e.g. when the name can give rise to confusion, ridicule, unusual orthographic difficulties, or stigmatisation.

In 1982, Sweden passed a Naming Law, which among other things states that if you want to change your name, you must keep at least one of the names that you were originally given and you can only change your name once. In 1991, a Swedish couple refused to give their newborn a legal name, in protest. In 1996, when fined after leaving their child legally nameless for five years, they submitted the child’s name as ‘Brfxxccxxmnpcccclllmmnprxvclmnckssqlbb11116’ (though this was rejected, as was their second suggestion: ‘A’). Middle names seem to attract less controversy, with instances of ‘Google’ and ‘Lego’ permitted in recent years.

Under communism, Czech parents were only allowed to name their children with given names from the list of ‘name days’ in the Czech calendar. Since 1989, children can officially be named anything, provided the name exists somewhere and is neither insulting nor demeaning, but even now registry offices may reject unusual names.

Denmark has a strict Law on Personal Names whereby parents choose from a list of 7,000 pre-approved names. If you want to name your child something that isn’t on the list, you have to obtain permission from your local parish church, whereupon the name is reviewed by government officials. The Law also states that names must indicate gender, you can’t use a last name as a first name and unusual names may be rejected. Each year, 15-20 % of registered names are rejected.

Portugal has fairly strict naming laws to protect children from ridicule and misunderstandings. There is a list of officially approved names for parents to choose from and there are no unisex names. Names have to be traditionally Portuguese, unless one of the parents is foreign, and they must be spelt according to the rules of Portuguese orthography (e.g. ‘Filipe’ rather than ‘Philipe’). Furthermore, nicknames or shortened names are not permitted as official names (e.g. ‘Beatriz’ but not ‘Bia’). As in many Catholic countries, Portuguese names were mainly inspired by the Saints’ Calendar and unsurprisingly the most common names are still linked to well-known saints.