10 brilliant words that should be dictionaryised 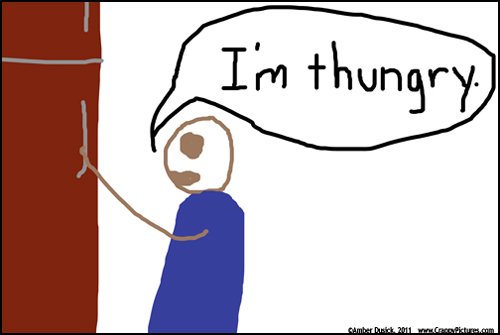 New words are springing to life all the time whether it comes from a hit TV series or simply a technological discovery, but many new words are coined all the time to describe our increasingly modern life. Most of these are new and innovative, although many are derived from two pre-existing words, smoke and fog becomes ‘smog’, and these are called portmanteaus. New word creations are coming into use all the time and have the benefit of conveying two meanings in one.

Here we will take a look at some of the portmanteaus we feel should be added to the dictionary, or dictionaryised, in the not too distant future.

ASKHOLE – Somebody who asks many questions when the answer is really quite obvious, yet they seem to miss even the basic points. This term may also be applied to people who don’t stop asking questions through a film you’re trying to watch.

DESTINESIA – A combination of destination and amnesia, destinesia is encountered by the young and old alike. You run upstairs, but forget what you went up for; you enter the kitchen, but have no idea why you’re there.

BEDGASM – When you climb into a freshly made bed at the end of a long hard day’s work- I’m sure you’ve had plenty of these.

PADDICT – Somebody you can’t prise away from playing on their precious iPad or tablet even with the use of a crowbar. Paddiction can be a serious and debilitating illness that needs curing with copious amounts of Chinese appupuncture.

TEXTPECTATION – The feeling you get when you’re waiting anxiously for a text message from a friend or loved one. Not so much used in a verbal sense, but certainly another emotion we can add to our rosters.

CELLFISH – An American term for somebody who uses their mobile phone with blatant disregard for the people around them; be it speaking out loud in a library or texting someone else during a conversation.

AFTERCLAP – No, not some kind of infectious disease, an afterclap is that single, solitary clap heard from somebody after every normal person has finished clapping.

BEERBOARDING – The act of obtaining information covertly from somebody under the influence of alcohol while their inhibitions are softened. The more alcohol used, the greater the technique works, the more information can be extracted.

PASSFUSION – The act of getting extremely confused and muddled up online when you can’t remember which password goes with which account. The verb ‘to passfuse’ can also be used to express this unique confusion.

NONVERSATION – A conversation held purely to alleviate the silence in the room. This can range from anything; from cutting toenails to radiator covers, but essentially it is conversation that doesn’t add anything at all to our lives.